I’ve heard many a parent chatter about their kids attending Nippers and had no idea what they were talking about. One day a friend was sharing her experience with me of their Sunday mornings at Greenwich Baths and I knew my ex-pat kiddos had to have a go at this.

A Surf Lifesaving History: As ocean swimming grew in popularity in the early 1900’s, so did the apparent dangers. Small groups of surfers and swimmers joined together to form lifesaving groups to assist those inexperienced beach-goers in need. In New South Wales alone there are over 75,000 members of Surf Lifesaving Clubs (SLSC) and they claim to be one of the biggest volunteer organisations in the country. The members patrol over 1500km of beach in New South Wales thanks to 129 individual clubs. Each summer season from September to April volunteers spend over 650,000 hours patrolling the coastline and helping the community. The iconic red and yellow flags of the lifesavers are recognised and respected everywhere. 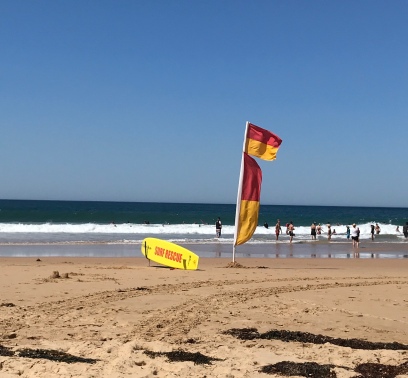 After some children were washed away by a strong rip current around Christmas time 1960, a public meeting was held to discuss what could be done. The members thought it best to form a branch of the SLSC to start educating people from a young age about beach and water safety. An Australian tradition was born as “Nippers” was created by the Nambucca Heads Lifesaving Club in 1961. The aim was to keep the kids safe and recruit them so that they would become involved and stay involved. 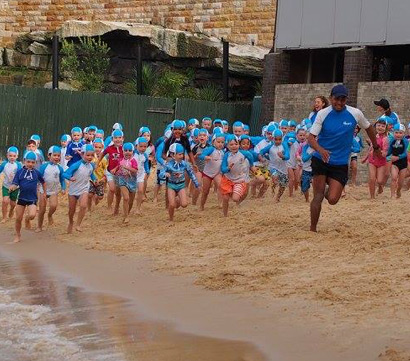 These young surf lifesavers range in age between 5 and 14 years old. They do not patrol the beaches as the senior lifesavers do, however, their focus is on fun and surf awareness. Nippers learn about beach safety, the dangers of rocks and animals, surf conditions, rips and waves. Nippers participate in beach sports carnivals against other clubs in skills such as swimming and board races, beach sprints and relays.

When children turn 13, and if interested in continuing, they have the option to take first aid and CPR and complete their Surf Rescue Certificate enabling them to patrol beaches and take part in senior competitions including surf ski and surf boat races.

What do Sunday mornings look like at the beaches here in Sydney? Heaps of parents smiling, catching up with neighbours, and admiring their children’s early morning zeal as they move from one drill to the next. For example of popularity, Coogee Beach as of 8am will have around 1000 children participating. Covered in sand and wearing their nippers caps the children spend 5 minutes at each station practising a particular skill before moving on to the next. Each class lasts 30 minutes and runs like a well-oiled machine, never running late. They run flags, crawl through sand ditches, hop on surf boards and lap a course as many times as possible, and rescue “people” by sprinting into the water and collecting balls returning them to safety. One drill after another, it is like a beach obstacle course. A sandy Tough Mudder if you will. It seems that at each class the drills alternate but a few staples (like board paddling and running flags) can be relied upon each week.

We’ve enrolled for our first time this term at Greenwich Baths. It is absolutely smashed with families passing on this tradition to their little ones each weekend. My kids originally grumbled at the prospect of Sunday morning beach safety before even giving it a go. I’m so thrilled to report that they immediately changed their tune once they realised just how much fun it is. They love the different challenges and I watch as their competitive streak’s spike as they dart to collect flags and balls. Racing around, rolling through sand, giggling as they knock over their instructors in a game of tug of war. I watch on with the Sydney skyline as the backdrop very grateful to be part of this cultural experience. 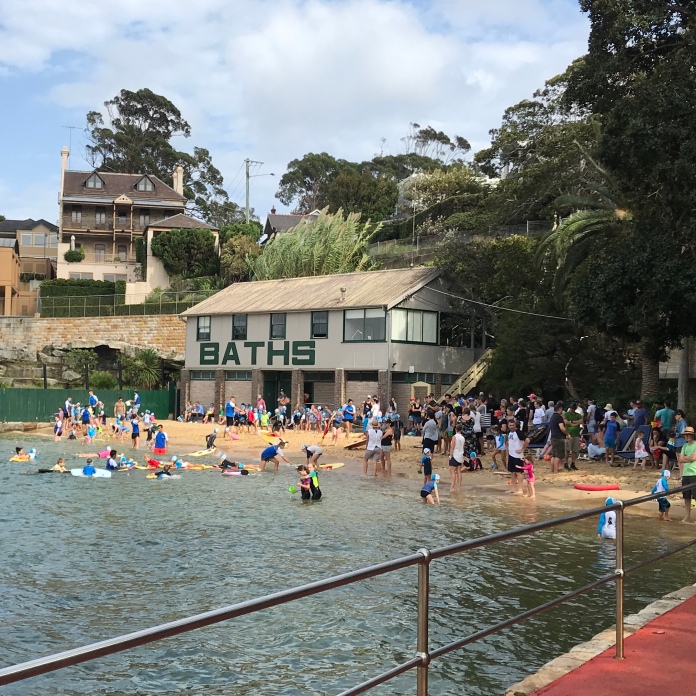 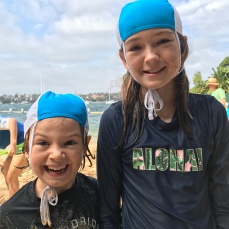 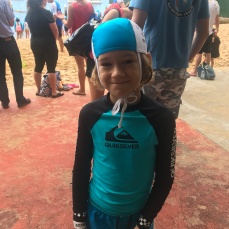 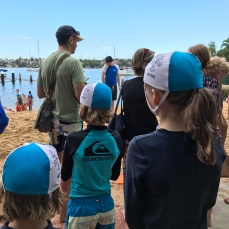