We decided to stop in KL for a few days on our way back from Sri Lanka since we were transiting through. What to do with two full days to explore a new city? Deciding to maximise on our time we booked a couple of tours. We turned to Urban Adventures,  who we’ve used in other cities, as their half-day excursions are a great intro to an unknown place with the added bonus of chatting with locals. It’s a win-win and I can’t recommend them enough.

We also felt that just hitting the tourist check list has never left us feeling satisfied. The best way to get acquainted with a country is to meet it’s people, wander and be active. So going with that idea we also signed up for a half-day of rock climbing at a favourite Malaysian climbing area near Batu Caves. 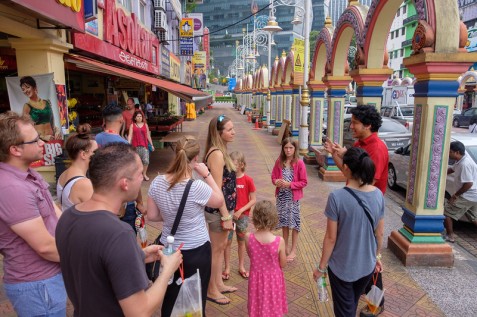 We love walking tours as a means of learning about a new city. What better way than to combine it with amazing and spicy street food. We literally ate for 4 hours straight. I lost count of how many establishments we visited but we tried everything. The kids gave most things a go, too.  We were impressed.

Malaysian food is comprised of three different types of cuisine: Indian, Chinese and Malay. The traditional restaurants here would be considered run down shacks by the western world. The food, however, is exceptional and clean and the families that run them friendly and welcoming. We visited one after another on our tour. Some are built with corrugated metal and others have steel poles that support colourful tarp roofs. A few places offered outdoor plastic patio furniture to sit and relax while others served food in paper sacks to stand and enjoy or to take away.

A quick rundown of how the tour flowed is this: we started the day in Brickfields, which is an Indian neighbourhood, enjoying fried pastry stuffed with various types of curry and eventually lavished in a complete Indian meal. We then worked our way through Malaysian noodles, Chinatown and then concluded with many street food sweet shops. 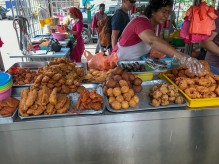 Chris and Ian spoke with such perfect english I asked them about their schooling. They told me that the  Malaysian education system requires children to learn English starting in kindergarten which is why they spoke so beautifully. I love this, what a gift to be able to communicate in multiple languages.

We had a lesson in eating with our right hand (and no utensils). It is more precise than just scooping food up and messily filling your face with slop. Rice or bread is used to soak up the curry and left to rest on your four fingers and then the thumb is used to move it across the fingers and into the mouth. When done properly it is very tidy and efficient. Once we get the hang of it it is a very pleasant way to enjoy our meal. All restaurants offered a convenient hand washing station for easy clean up afterward.

We discovered that a girl in our group was from Balmain too. She lives just a 5-minute walk from where we live in Sydney. The kids glommed on to her and enjoyed chatting about home. It’s was no surprise to us at all to find out she used to be a nanny–she was so natural with the kids. It was nice to see them socialising and enjoying themselves.

In Malaysia, they sweeten everything. We tried coffee made with sweetened condensed milk. It was made in a traditional way with large tin cups filled with coffee, the milk is added and then it’s poured from one cup at great height into another at a much lower height producing a stream of caramel coffee in the air. This is repeated to mix it well and in the end it had a very creamy, frothy quality.

We tried many sweets from Indian gulab jamun to Chinese New Year cake made with purple sweet potato, yam and glutinous rice which is then breaded and fried, delish! The kids opted out of this one after not enjoying the Indian dessert. They at least tried the gulab jamun as it looked like a donut ball. It was a very sweet and heavy treat as it was soaked in rosewater syrup. I’ve never been a fan myself but shared one with Stephen anyway. When in Rome and all. We then tried Cendol which is an iced sweet dessert that contains droplets of worm-like green rice flour jelly, coconut milk and palm sugar syrup. It is eaten for a refreshing treat and we loved it! It was much lighter and more to our liking than the other desserts.

We did learn some historical and cultural tidbits as well while we stuffed our faces. Some notable places of interest we visited were the oldest Hindu temple in KL called the Sri Mahamariamman Temple and we walked through Thean Hou Temple which had three alters in the prayer hall with elements representing Taoism, Confucianism and Buddhism.  We learned that Kuala Lumpur means “muddy confluence”; kuala is the point where two rivers join together or an estuary, and lumpur means “mud”. 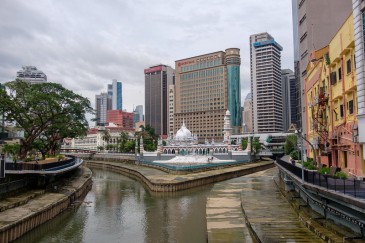 When we concluded our tour in Chinatown we walked to Merdeka Square, translated as Independence Square. It is the famous square where the Union Jack was lowered and the Malaysian flag hoisted for the first time at midnight 31 August, 1957. At the square is a cricket ground and one of the world’s tallest flagpoles which stands at 95 meters.

We then hopped in an Uber to visit the Kuala Lumpur Bird Park located in the Kuala Lumpur Lake Gardens. It advertised having the largest walk through aviary in the world. Our favourite finds at the park were the horn billed birds, the flamingoes, the large Blue Crowned Pigeon and the owls. James and I fed some cute lorikeets milk and honey as they clawed onto us. It made us feel like we were home in Sydney.

Side note: Uber rides in KL are incredibly affordable. It seemed cheaper at times than taking the metro. We made several trips across town for around 12 Malaysian Ringgits each which is about $4 AUD!

Once again, an inexpensive and short Uber ride later and we were strolling through KLCC Park to gaze upon the Petronas Towers. We didn’t go up to the viewing platform as we usually would. We thought the best view to be had was looking at the towers from a distance. The park was filled with many tourists with the same idea as we had, capturing selfies as the sun was getting ready to set. There were locals in the park too, many ex-pats in fact, out for their evening jog. It was nice to hang out in a local park and watch the goings on.

Friday 5 January
We were up early and, as a treat for the kids, we ordered room service as we had an early start to Gua Damai Extreme Park near Batu Caves for a morning of guided rock climbing.  The limestone that forms the caves there is said to be over 400 million years old, wow!

After brekkie we took an Uber 30 minutes north.  It was rainy and grey and we crossed our fingers that the weather would pass. Shami and Hazman, our guides, arrived 15 minutes later. The rain returned so we sat under the cover of a small picnic shelter signing the necessary waivers. Everyone tried on climbing shoes for size so that we wasted no time once the weather passed. It did shortly and James was the first to go. They started easy for a warm up with two 5c climbs. Everyone ascended confidently despite the wet rock and they all commented that chalk seemed pointless. 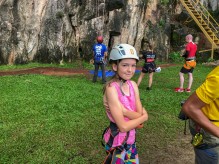 The rain unfortunately returned with a very heavy downpour with Fiona halfway up the rock.  She completed her route despite the rain. There were another group of climbers here as well and we all ran for cover under the concrete shelters again. The boys told us about their other interests in base jumping and caving, each fascinating to learn about.  They told us about the local weather and that it was the rainy season. The summer presented its own challenges as often the stone is too hot to even touch. We all agreed that it must be pretty hot. They suggested we visit Penang next time, which also has great climbing but on granite walls. Shami told us how unbelievably delicious the street food is there. Come to think of it our food tour guides had said the same. Next trip.

The rain didn’t seem like it would let up so after two hours we cut the climbing short and headed to Batu Caves.  At about 100 meters above the ground, the Batu Caves temple complex consists of three main caves and a few smaller ones. The biggest, referred to as Cathedral Cave or Temple Cave, has a very high ceiling and features ornate Hindu shrines. To reach it, you must climb a steep flight of 272 steps. The Hindu shrine is one of the largest outside of India and it is dedicated to Lord Murugan. Murugan is the son of Parvati and Shiva and is known as the God of War. The temple is a gorgeous natural wonder and should be the set of an adventure film. We loved wandering around all of it’s nooks and we rated it as our top temple visit ever for it’s sheer awesomeness. 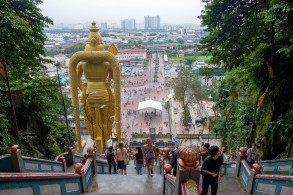 There were monkeys all around the caves. We were very spoiled hanging out with these small furry creatures for the last two weeks. I would love to live in a place where this is the norm. They were fascinating to watch and always made us smile. There were many baby monkeys clinging to their moms or frolicking nearby her. Super cute.

We spent the afternoon at the really fab pool area at our hotel Hilton Sentral. It’s on the 8th floor on an outdoor patio accompanied by two bars, a sushi restaurant and a more causal place for sandwiches and burgers called the Boardwalk Cafe. The kids took turns flying down the waterslide into the pool and swimming beneath the waterfall. They loved it and it’s a good way to spend a humid afternoon.

We went to see Star Wars: The Last Jedi in the evening in one of the biggest shopping malls we had ever seen. There were so many malls similar to this one in KL and I suppose it’s because it’s a good place to escape the heat and humidity. There were shops I hadn’t seen in years from America like Carl’s Jr, Nordic Track and Ace Hardware. There were also some that I recognised from Australia, England and even India. This city is a true melting pot of so many cultures. The malls were easy to get to as many connect with metro lines and the walk was never far.

Kuala Lumpur seems like an easy city to live in. Everyone speaks English, there is great inexpensive food, people are kind and tolerant of other cultures, there are excellent public transport options, plus it’s affordable.

I’m happy that we decided to stop here for a couple of days on our way back to Sydney. I feel like we covered much ground and learnt a lot in our short time. Having never considered Kuala Lumpur as a holiday destination in the past we are now fans. A small city in Southeast Asia more vibrant than we could have imagined. This part of the world is quickly becoming a favourite for all of us and we can’t wait to come back to explore some more.