It was a bittersweet start to our Christmas vacation to say goodbye to our friends and house guests and leave for Sri Lanka, where we will join another family for a week of culture and sun. It has felt like a month long holiday between the two visits. We are so grateful to have such wonderful people in our lives, especially those who will travel so far to holiday with us.

We flew Air Asia for the first time. It reminded me of Easy Jet…a low cost carrier where you pay for everything individually: entertainment, food, seat selection, power chargers for devices, etc. On our first flight to Kuala Lumpur (8.5 hours) credit cards were accepted to pay for food but had a minimum purchase which made us buy more than what we needed just to meet it. The second flight from KL to Colombo only took Malaysian ringgits and we didn’t have any cash so that was annoying. Ah, the sacrifices to arrive in paradise.

Sri Lanka – the warm breezes carry the sweet scent of incense, curry and garlic. It’s heavenly. We arrived at around midnight and went straight to bed. It was 5 am in Sydney and we were near to 24 hours of being awake. We stayed the night near the airport in Negombo at the Astoria Residences. It’s all hazy now from last night’s fatigue but I do remember reading a sign upon entering “This is not a luxury hotel.” It was clean and basic and we split into adjacent rooms.

We had to be up and out early, by 7am, to fly by sea plane on Cinnamon Air to Kandy. What a great experience it was from start to finish. We were met by shuttle bus to escort us to the terminal an hour before. They provided us with an outdoor patio to relax and watch the commuter planes and private jets coming and going. The staff were lovely and doted on us and the kids offering complimentary beverages and pleasant conversation. Our plane had 8 seats, however, there were no other passengers on our flight which allowed us our own private charter. It was a very gentle flight and at times we felt so light in the air, like a paper airplane, as if a strong enough gust of wind could just take us away with it.

We could see Adam’s Peak in the distance, which is a pilgrimage site shared by all religions in Sri Lanka. They say it is the place where Adam first set foot on earth after being cast out of heaven. Unfortunately we won’t have time to hike it this visit. We landed gently in Pogwolla Reservoir, it was a wonderful ride. We were greeted by a staff member at the dock who kindly kept us company while we waited for our car and driver to arrive.
We were startled by a very large lizard, called a water monitor, as he approached by water and then climbed the hillside where we sat. Apparently, there is a nest at the dock and there were many babies. The man told us these lizards are becoming rare in Sri Lanka and that they are called water monitors because they clean the water. Neat. 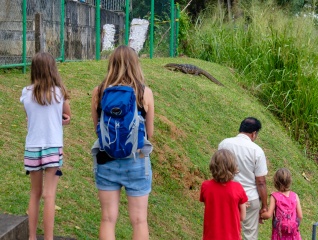 We connected with our driver, Arun, who we will spend the duration of our trip with. After checking in to our hotel, he took us to Kandy town for lunch. Arun first showed us a scenic viewpoint over Kandy Lake to get some perspective on the area. It’s beautiful with lush green tropical forest with the lake as a centerpiece. We ate lunch at a fabulous vegetarian South Indian restaurant famous to the area. It was divine but we ordered way too much dosa, chappati and all the accompaniments. In an effort to not waste we attempted to eat it all and almost succeeded. When we paid and did the conversion, we realised our massive feast cost us about $12 AUD. Wow! 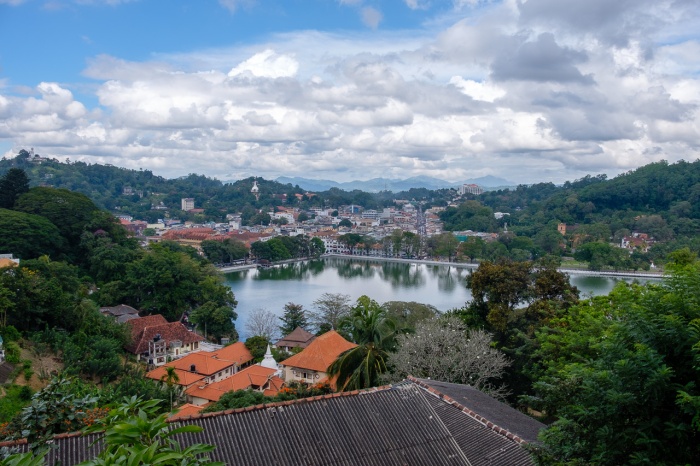 Looking down at Kandy

Sinhala is the official language of Sri Lanka but many people learn English as well. Arun tells us that they joke that the people speak Singlish because for every 10 words a Sri Lankan speaks, four of those are English.

We also learned that there are four main religions in Sri Lanka with Buddhism being number one (although buddhism is a philosophy not a religion). The others are Muslim, Christianity and Hindu. There is tolerance and acceptance of all religions in Sri Lanka and all holidays are celebrated with the day off for everyone. I love this. I expect this is why we have been greeted with Merry Christmas by most people we interact with and why there are Christmas trees and jingle bells everywhere. Other countries could learn a thing or two from the Sri Lankans about peace and acceptance.

We drove 90 minutes to Pinnawala Elephant Orphanage today to watch the rescues bathe in the local river. There were so many of these gentle giants and we all loved watching them frolic in the water. It does seem better than the traditional ride an elephant type of charade; however, still a spectacle. Shops lined the river selling touristy knick knacks, elephant poo paper and elephant printed beach cover ups. Restaurants with good views invited us in to buy a drink and watch the bathing. We spent about an hour before we had lunch and carried on our way. 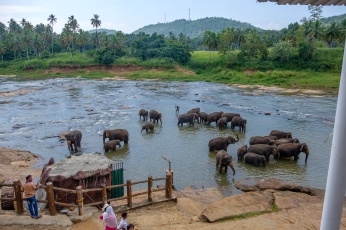 We stopped at Susantha Spice and Tea Garden to learn about the different plants native to Sri Lanka. We saw cacao, tiny pineapples, cardamon, vanilla, and peppercorn trees to name a few. They told us all about the healing benefits of each before asking us to purchase remedies to take home. We all tried a cinnamon balm massaged onto the forehead with a firm circular pressure, it felt amazing. We were treated to a small cup of spiced tea which the kids pleaded with us to bring back to Sydney. In addition to the tea, we ended up purchasing some lovely homemade vanilla extract and cinnamon sticks. Ceylon cinnamon is a far superior cinnamon to cassia and has many benefits including glucose metabolism, digestive health, antimicrobial and antiparasitic qualities, plus it’s sweet and we all happily nibbled on the delicate bark.

We made another detour to visit the Kadugannawa Tea Factory, where we learned about the process of picking and drying tea.  It involves many steps and working in rooms with very high temperatures. The smell is strong, like inhaling the steam over a pot of tea in a sauna. Tea leaves are dried with big fans, and turned by hand every 6 hours. Then the tea is rolled and separated. It goes through many more steps and machines to separate the colours and leaves from stems before becoming tea as we know it.

We enjoyed a cup of tea at the end of the tour. We each drank while nibbling on palm tree sugar called jaggery. We were instructed to enjoy it in this way and not to add the sugar to the cup itself. The jaggery looked like irregular brown cubes that tasted like rock candy or maple sugar…so delish. We ended up buying bags of the tasty treat to bring home. 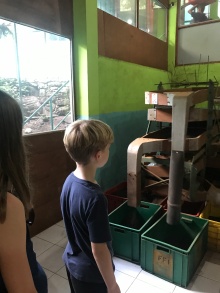 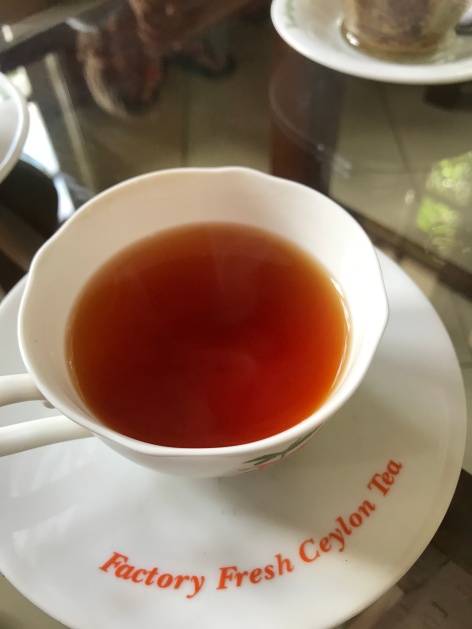 We shopped at a roadside vendor to purchase bananas, oranges and jack fruit. The bananas were miniature as were the mandarins. The oranges were just smaller than a ping pong ball. All super sweet and a welcome afternoon snack if you can bear the peeling of such a tiny little fruit.

We stopped to say hi to some monkeys hanging out by the side of the road and threw a banana out the door of the van which one gracefully caught and peeled in no time. Professional banana eaters here. We are all enamoured by these cute little creatures and I think a few of us would be happy to bring one back home. 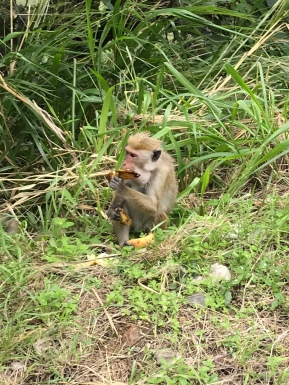 Who would have guessed–we passed a Bloomingdales in a small village on the way back to our hotel in Kandy. 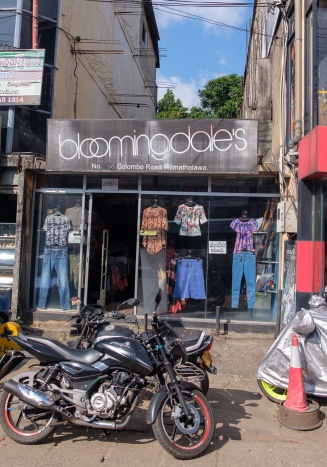 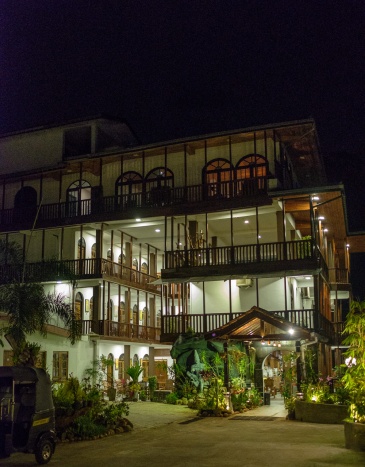 In the evening we made our way to Kandy town for a Sri Lankan dance show at the Red Cross Hall followed by a visit to the Temple of the Tooth–said to hold one of Buddha’s teeth. It is a beautiful and large Buddhist temple in Kandy on the lake. We meandered through, watching and listening to the service, but it felt strange touring the temple while people were worshiping. They sit all over the stone floors praying, while we step over them ogling.  It is weird and we left pretty quickly. I suppose our contribution in the form of entrance fee will benefit their place of worship, but still. 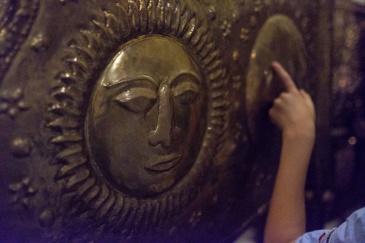 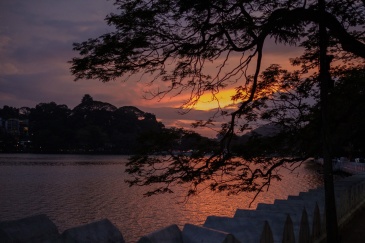 Tomorrow we travel from Kandy to Ella on what is said to be the most beautiful train ride in the world.  Stay tuned…

One thought on “Sri Lankan Christmas”