Do not be afraid of sharing space and adventure with another like-minded family, for this scenario can reward you tenfold. We have spent many holidays traveling with friends and their children and have always returned grateful with memories to last a lifetime.

Since we have three children our kids have built-in playmates by default; however, adding a few more to the mix usually ensures a good time. For instance, last spring we travelled to Essaouira, Morocco and shared a riad (a traditional Moroccan house with an interior garden or courtyard) with close friends of ours and their two kids.  By combining our money together, we were able to rent a place with lots of space, a pool and a private tennis court. When someone became bored or frustrated a smaller group would break off and go for a swim or play with the resident dog, Pluto. No one really ever sat alone grumping.

It’s nearly impossible with kids, and so many of them, to not argue and upset one another but they can easily remedy it with the options of an alternative playmate or game. There have been times when the kids from each family have been warring and the siblings band together. Generally, this doesn’t last long before all is forgotten and a new game of “le glacé”, the French version of freeze-tag, begins. Sometimes we encourage taking some down time from each other to settle the heavy mood.

Fiona in our yurt, acting out eating an ice cream

We adore getting the whole tribe involved in an activity. Sitting around a dining table for a meal is perfect for games that require a large group to be successful like “Chinese whispers” (called “telephone” or “operator” in the U.S.). Having 10 people participating allows time for the message to get crossed and laughter to ensue. Charades with kids is a blast and the ideal game for when on the road. We have leaned on this party game to liven up many a night traveling. Generally, I quickly jot down many funny and simple ideas for the kids to pick out of a jar (tooth brushing, using the toilet, swimming, cycling, skiing, etc). We take turns picking and acting the action out which often leads to hilarity. It’s especially funny when the parents get going. Seeing your husband applying his lipstick is priceless, and it often has the kids rolling around with laughter. 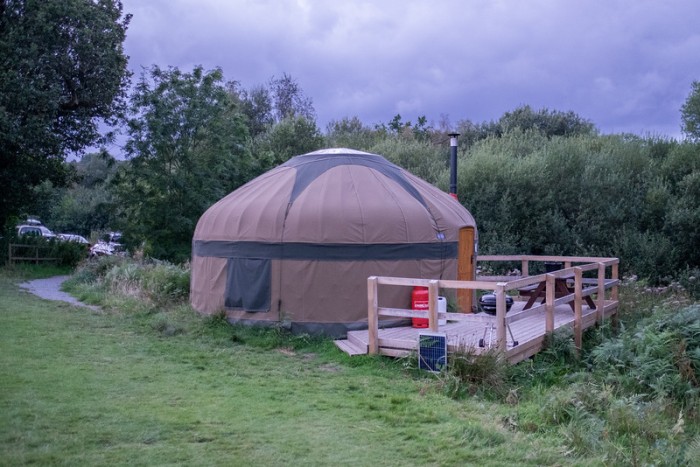 It’s common for the kids and adults to disagree on an activity.  But this isn’t a problem if we are willing to compromise or separate if need be. While yurt camping in the UK’s Lake District the kids wanted a movie night and the parents some time to chat. Ten minutes later, a bowl of home-made popcorn and a laptop playing a movie, the kids were relaxing and happy all snuggled under blankets. The adults next door in another yurt were enjoying grown-up conversation with our feet up around the wood burning stove.

One afternoon at a beach resort with friends, our respective families couldn’t agree on pool or beach so we went our separate ways and regrouped later, each of us happy that we did what felt right at that moment. On other occasions I can remember us all craving a little family alone time. We chose to do separate activities (ours included pool time and our friends’ a nap and a private meal – nothing fancy). It was so well received by everyone that when we came together later in the day everyone was refreshed and happy to see one another. I think it’s important to not expect to be together all the time just because you travel together. Allow for private family time and go your separate ways.

With two sets of responsible parents it’s easy to trade off an evening of babysitting. Free sitters—what a gift! The night is winding down, the kids are watching a movie and settling in to bed and one lucky couple is headed out for a night on the town (or at the resort). This reason alone justifies a joint vacation.

Stephen’s “me time” in Mauritius

We always find ways to incorporate healthy individual “me time” into our group holidays as well. This includes going for a run or walk, getting a massage, or practising yoga. It’s important to have these breaks so that when we are together as a family everyone is grounded and happy. Perhaps one parent wants to see an exhibit at a museum that no one else is interested in—go for it, you can! Treasured personal time and memories of lounging on a chaise while the dads toss the kids around in the pool: bliss.

Listen to your gut and if the kids are not into an activity or outing, have a second thought about pushing them. Generally, my three are interested (at least for some duration) in important places and museums.  However, they are still children and sometimes prefer to be playing rather than sightseeing. They do not need to see every single highlight in the guidebook.

We were at the end of a week traveling around southern Spain with friends and some of us were a bit punchy from long drives and lots of sightseeing. I was determined to see the Mesquita no matter what, although the kids probably needed a break and some running around time after driving several hours to reach Cordoba. Our friend took his daughter to the park and we soldiered on with his wife and our three little ones. In hindsight, I should’ve left our kids to play too but really didn’t want anyone to miss out on the gorgeous historical site. The kids, although hot and tired, persevered and it was an amazing and tranquil place. But I’m sure they would’ve been just as happy at the playground that day.

Splitting the cost is a huge benefit of traveling together. Find a gorgeous home that sleeps 10, includes a pool, and is in a fab destination, then halve the price! You get all of the above mentioned extras plus its usually cheaper. Some things to discuss early on with your intended travelling companions is the type of accommodation you’re looking for, the important amenities for each family and the budget.  It’s no good if one family feels like they’re not getting the vacation they’re after or if another feels like they’re overshooting their budget. A frank conversation about these things at the outset can help ensure that everybody wins. 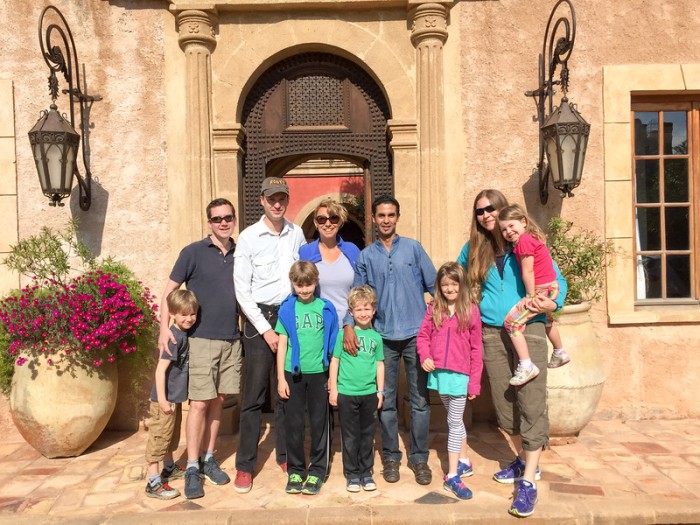 2 thoughts on “The joys of dual family travel”