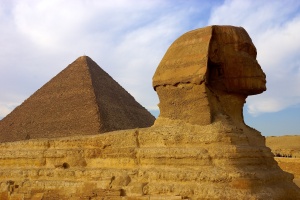 We went on a bit of an impromptu trip to Egypt for a week of “winter sun” (a combination taken together as a single noun here, like “chest of drawers”) and were sad and angry to get the call telling us that our home in London had been burgled.  The thieves knew what they were after–our safe.  Where we placed all of Kate’s valuables before we went to Egypt because we were concerned of bringing them with us.  So Kate’s engagement ring, wedding ring and virtually all other jewellery that I’ve given her over the last nine years for birthdays, anniversaries, Valentine’s, etc., is all gone.  It wasn’t insured and that’s just our foolishness.  I don’t mention the insurance for sympathy, but because the natural reaction from everyone is, “well, at least it’s insured, right?”

Also taken were a bunch of credit cards, so we’ve also been going through the process of registering with credit monitoring services and cancelling cards.  All-in-all, not a great experience.

As with any troubling thing, we’re trying to look for what we can learn from it and any positives to come out of it.  Learned: renew insurance (message received).

We’ve found a couple of positives.  We’ve had such an overwhelming show of support from our friends.  They cleaned up our place before we returned, sent us gifts and commiserated with us.  How unbelievably lucky we are to have these people in our lives.

Another positive is that it’s helping us think a bit harder about our stuff.  We were looking for a new flat even before the burglary.  But as we look now, we’re starting to reconsider how much of our stuff we really need to keep.  The slogan on our site is having less, doing more.  We’ve been doing that a bit, but I think this is going to help us focus all the more on living simply and fully.

In the week we were burgled, we relaxed with our kids under the Egyptian sun, gazed up at Jupiter after having ridden a camel in the desert, cruised down the longest river in the world, and climbed on one of the wonders of the world (until the police ordered us down…).  Neither alarms nor insurance are required to keep that experience safe–it’s ours.

One thought on “Burgled.”